It is so fun to join in the fun for Read Across America/Dr. Seuss' birthday. The focus is definitely on the reading of Dr. Seuss's books and every year I look all over Pinterest and get more ideas for fun with food. I set the food up, show the children, take the pictures, then have to chop it all up due to the ages of the children in my group. But they and their parents do enjoy it. 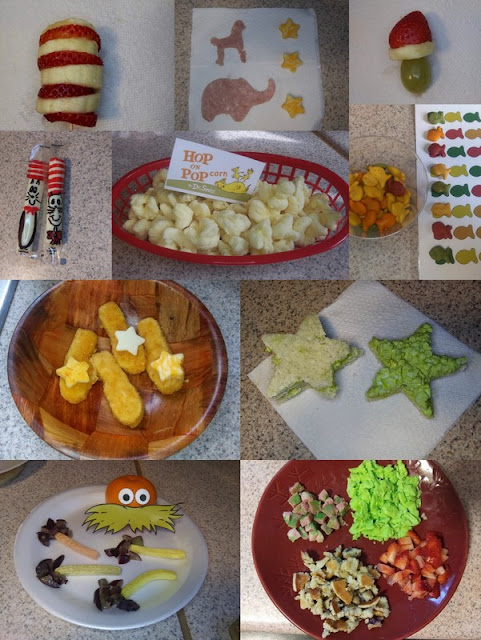 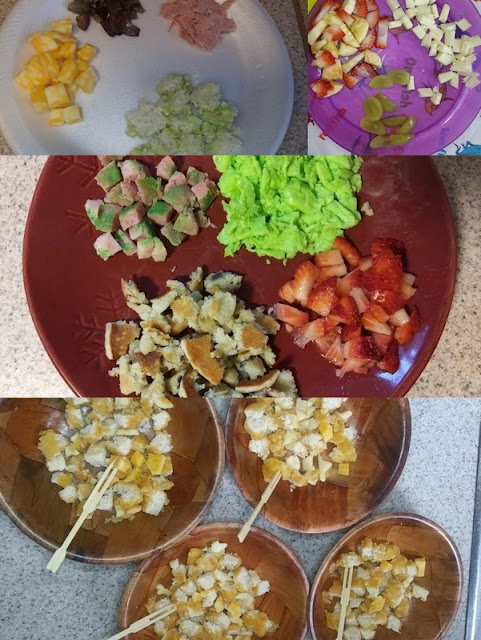 The very next thing I worked on was the sensory bin. I have not made a sensory bin for this theme before, so I knew I would end up having to purchase some things. I found all kinds of ideas for making Truffula trees online and went with painted popsicle sticks with big puffballs (bought on Amazon) glued to them and incorporated them into the bin. The plastic blue stones are glow in the dark, I had gotten them and a few other colors back when I was doing reviews and was saving for the Fairy Garden that some of the grandchildren are going to make. There are erasers with the characters on them from the Target Dollar Spot that I found over a year ago, then a set of rubber ornaments from Amazon, the small plastic colored fish, and solid-colored cups are a Dr. Seuss color sorting game I purchased online but am not sure now what store. I used white paint markers to put the stripes on the small red Solo shot cups, red paint marker to color the small wooden letters, I already had polished white stones from past sensory bins and added a few different types of child-sized tongs I had gotten from Amazon a few years back. I had a good time building this one, and even though I did put some money into it, I will be able to use it all for many years to come. 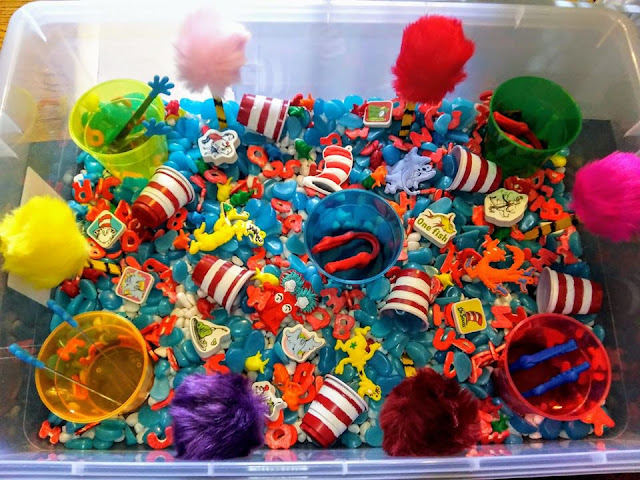 I used some of the plastic solid-colored fish from the game to set up a color matching invitation to work on their fine motor skills as well. 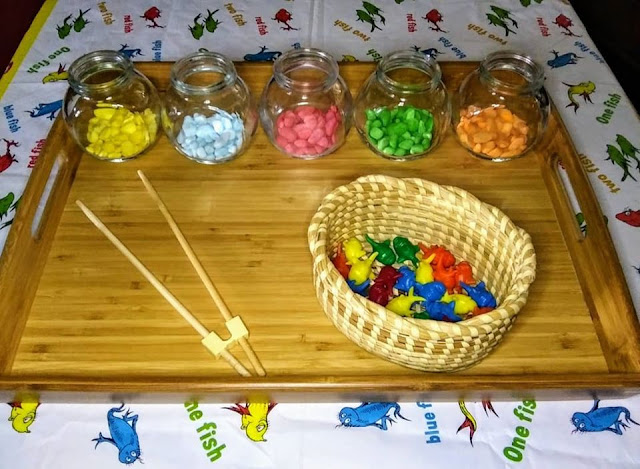 I used food coloring to dye some of the white polished stones though I definitely should have worked harder on the blue and red, and had these fishbowl looking jars that I use for spices. The wooden chopsticks are from our favorite Chinese restaurant in town, they gave me a few sets to use with the children, and I purchased the helper pieces from Amazon. The beautiful tray is also from Amazon, and the basket is from an estate sale. I admittedly have a problem when it comes to baskets. I may even be obsessed.

Next, I decided to change up the photo op set up this year. I found the adorable Dr. Seuss' books material to use for the backdrop on Amazon, as well as the Cat in the Hat balloon, the One Fish, Two Fish, Red Fish, Blue Fish baby toy and I already had the Horton finger puppet, so I went online and found a set with the Cat in the Hat, the talking Fish, and Thing 1 and Thing 2. I already had the red, white and blue lanterns, the black and white tablecloth and the black and white towel. The reusable bag was purchased from the Target Dollar Spot a couple years ago. 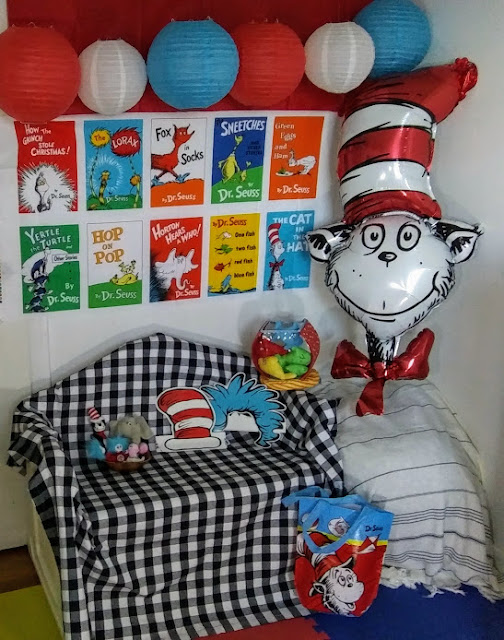 There are many free Dr. Seuss printables I found on Pinterest that I used for coloring, matching, and number/letter recognition with the children. But they are mostly toddlers, so we focus on hands-on learning and learning through play.
Posted by Cindi S World at 5:49 PM