His Frugal deals, My Frugal Meals 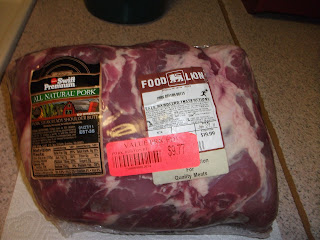 On one of my Jeff's trips to his favorite "meat deal" store, he picked up this 9.13 lb. Pork Boston Butt that was originally $19.99, for only $9.77!!!! I was ecstatic, cause we LOVE pulled pork. And its so easy to make...my friend Ninja (shoppingninja) gave us all this awesomely delicious recipe. Just cut off some of the extra layer of fat on the bottom, which I put into a freezer bag and froze to use another time for seasoning. Put the roast into the crock pot, add some grilling seasonings, we personally like a mixture of peppercorn, garlic, & seasoned salt, then pour a beer over it all...not a cheapy lite beer either, you want a good stout type beer, like Michelob dark. And no, you dont have to be a beer drinker for this to be a part of your recipe, because everyone knows, the actual alcohol cooks off of your meat.  Put the crockpot on high, and cook for about 4 hours. When it is done, and you know it is when it is literally falling apart, take it out of the crockpot and put into a container to "pull" the pork. Be sure to add some of the juice from cooking it to maintain the moistness. We prefer not to add sauce to our meat, so we can each have whatever type we want  and the extra that I will freeze can be used for other recipes, not just pulled pork sandwiches. We always have bottles of traditional barbecue sauce around since when it is on sale and with a coupon you can get it for like almost nothing. But I also make two sauces and keep in jars in the fridge that we really like.

Eastern N.C. BBQ Sauce
1 c. white vinegar
1 c. cider vinegar
1 T. hot pepper sauce
1 T. brown sugar
1 T. cayenne pepper
1 tsp. salt
1 tsp. ground black pepper
Put all into a jar, preferrably a day or so before you want to use it, and shake it up every time you go into the fridge so the flavors can meld together.

So basically, this pork that cost $9.77, provided us with two adult portion dinners, and since my daughter and the three kiddos will be here again tomorrow, some for that and  enough for another lunch will be put into the fridge and I will fill  freezer bags for four more complete meals. I think we did pretty good for under $10! 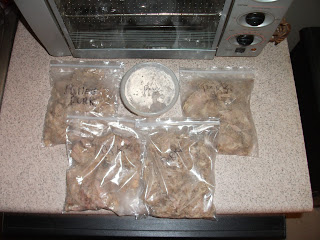 Email ThisBlogThis!Share to TwitterShare to FacebookShare to Pinterest
Labels: His frugal deals, my frugal meals